You’re almighty and kind. You know everything about me and us. Still I’m writing this formally to you.
With blessings of our parents we’ve decided to “join” each other forever on 25th December 2010. (You know who)

Please execute below commands on our wedding day 🙂

I’m always thankful and greatful to you God!

Though the God will execute above commands on Christmas day, you my friend is invited to share the joy and happiness of our wedding.
So below is the invite architecture for you. 😉

How to get the Great News:

How to get the Invitation:

SELECT invite AS Invitation FROM kedar JOIN madhumita ON (25122010);

How to get the Location:
SELECT venue AS Venue, wedDate AS Wedding_Date, wedtime AS Wedding_Time FROM kedar JOIN madhumita ON (25122010);

Wanna know a bit about our likings?

Have doubts? What is there on 25th December? Contact me:
SELECT email as Email, phone AS Phone FROM kedar JOIN madhumita ON (25122010);

I’m sure many of you will try to execute:

SELECT * FROM OurStory;
0 Rows Affected. You do not have sufficient privileges. Please contact Kedar.

Okay enough !! For those who hate reading above stuff, below is clear-cut invitation for you 🙂

So here you go with Official Wedding Invite Card: 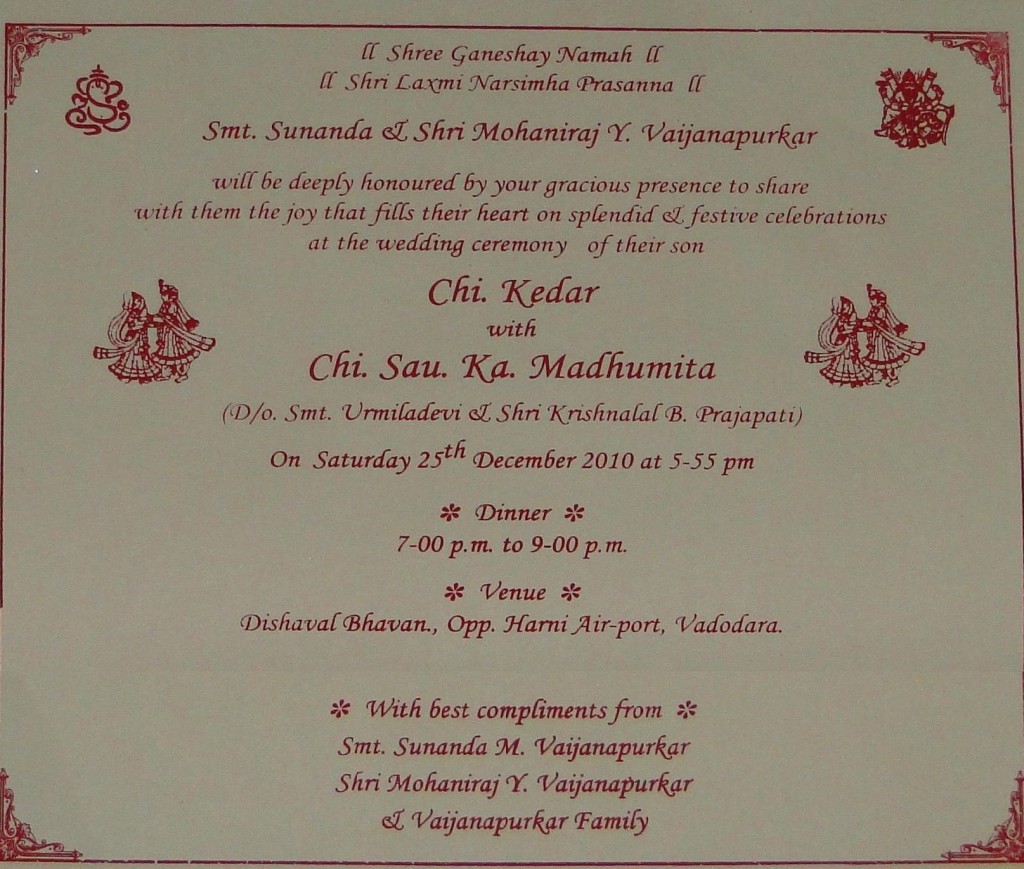 In the huge task of selecting a digital camera, one more day has passed.
I’m still not decided.

Yes, I have now felt an extreme need of purchasing a digital camera and I’m trying hard to wrap-up this chapter by end of this week.

I started getting idea from Ashish as he knows much more in cameras and he’s good at capturing as well.
After finishing his analysis and study he suggested me Sony DSC-W380 in my suggested price band of Rs. 15000.

Mean while I went on Sony store where I found and compared it with DSC-W370 and again get back to Mr. Ashish. W370 is having higher optical zoom (7X) as compared to 5x of W380 but still it was cheaper!! I learned that the processor is a main distinction between them W380 has BIONZ while W370 is having Sony-Processor.

Well the afternoon I happen to talk to Vic. Who owns Canon 400D and want to sell it and buy 5D.
According to him, all these Sony S8000, CoolPix or DSC series are “Ladies” cameras 🙂 He suggested me to raise the price band or buy a “pink” camera. Proper SLRs I will not get below 30K and I’m not much interested in jumping to that range.
Any ways Vic, I’m not gonna get Pink for sure, it’ll be Black, My favorite 🙂

My need is simple, maximum value for minimum money [Is it possible for free?] 😉
A camera having good zoom (at least 10x), Higher Pixels (at least 10) with some good lens and processor is my target.

In the evening Rakesh aka Raka aka Sabu told me to go for higher configuration and said some lens name “Carl Zuuuuuuiss” or something. I found the exact spelling later, he meant “Carl Zeiss”.

Then came the Hardik aka the Hard One (title given by Mr. Paul). He recollected my needs and started searching. Well since past two days I’ve visited almost all camera vendor’s sites and camera details; but seems like when Hardik again came to rescue, I started hunting for my DG-cam again.

Hardik come up with suggesting Sony’s DSC-H20 and Nikon’s Coolpix P100. Earlier we had discussed about Nikon S8000, but I was not much confident to go for it. I compared them with Sony DSC-H55/B and W370.
Now Nikon’s Coolpix P100 has got 26X Optical zoom but the price difference is almost 10,000.
Later I found Nikon’s COOLPIX L110 with 15X Optical Zoom with 12.1 MP @ ~15000.  Seems like I might have to settled for somewhere in 20K budget.
I didn’t stop here, I Googled for lens details and went on comparing Carl Zeiss VS Nikkor Lenses and their performance. At places I heard Carl Zeiss over Nikkor and anyways I have heard more about Zeiss 🙂 I’m not much in to that.

My friends, who have ever been to shopping with me, know such “indecisive” attribute about choosing things, but I need help.

Anyways I’m still not done with deciding which one to buy and I hope I pick a good one.