Holi is a major festival in India and most known as Festival of Colors celebrated all over India.
People send emails, text messages (sms) to wish Holi and use artificial (and sometimes natural – abir, gulaal) colors and meet our friends and relatives.

There prevails many stories behind the festival of Holi. The major was that of Holika and Bhakta Prahalad.

Here are Top 5 Questions you might be wondering about Holi.

1. Who actually was Hiranyakashipu?

Hmmm so it’s a story from Bhagavata Purana.

The Four Kumaras (Sons born from the mind or thought power of Brahma) were once visiting Lord Vishnu.
Jaya & Viajaya, the gate-keepers of Vaikuntha (abode of Lord Narayana) interrupted them to meet to Lord Vishnu.
Resulting in to the Four Kumaras’ curse to Jaya & Viajaya for giving up their divinity; be born on Earth, and live like normal human beings.
Now appears the Lord Vishnu, who gave the keepers two choices in reply of their request of lifting up the curses:
1. Take seven births on Earth as a devotee of Vishnu. OR
2. Take three births as his enemy.
Devotee keepers chose lesser time period to stay away from Vishnu and take birth as an enemy of Lord Vishnu for 3 births.

Life-2: Ravana and Kumbhakarna
Vishnu’s Rama avatar took care of them [According to Hindu epic Ramayana during the Treta Yuga.]

Life-3: Sishupala and Dantavakra
Vishnu’s Krishna avatar killed them. [According Mahabharata epic during the Dwapara Yuga.]

2. If Prahalad was born to the Danava (Hiranyakashipu) home how he is so devotee of Vishnu?

When hirankashipu was doing extreme Tapa to achieve boons from Lord Brahma on mountain Mandara, Gods seek this opportunity to attack on Danava’s city.

Devendra (Indra) was finally dragging Kayadhu (Hiranyakashipu’s Wife) as a war prisoner to kill her child as he suspected him to be a Danava as well.

That was the time when Narada appeared before and explained the birth cause of Prahalad to Indra, ultimately Indra let go Kayadhu by touching her feet giving atmost respect wih Narada.

Narada took Kayadhu to his ashrama and taught her Bhagavata Dharma (The way of winning the love of God), when Prahalad was present in his mother’s womb.
And thus Prahalad become devotee of Lord Vishnu / Shri-Hari / Narayana.

As per Hindu mythology Holika had a special gift that prevented her from being harmed by fire. But still she died due to severe burns in medical terms. But why?

The reasons I could found are either of these:

4. What was the boon Hiranyakasipu had achieved?

5. How Lord Vishnu “hacked” the Hiranyakasipu’s boon to kill him, keeping promises of Lord Brahma intact?

Bonus Que.: Why Holi is known as festival of colors?

In Vrindavan and Mathura (Where Lord Krishna grew up) the festival is celebrated for 16 days in remembrance of the divine love of Radha for Krishna. Krishna is believed to have complained to his mother(“Radha kyon gori, me khyon kala”) about his dark skin complexion and Radha’s fair. That’s when Krishna’s mother decided to apply colour to Radha’s face. 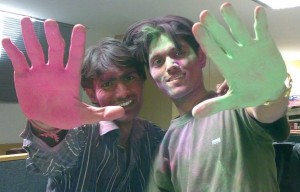 Almost all over the India (specifically North India) the festival of Colors is celebrated with great fanfare. People visits the neightbourhoods and relatives and exchage colors with traditional Abir and Gulaal and at places it’s also been enjoyed with Water using Pichkaris.