I have two csv files; File1 has Id and Value Columns and File2 has Id.

Problem: I need to compare both files and put respective values to File2 from File1. 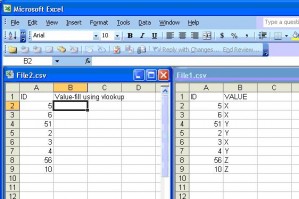 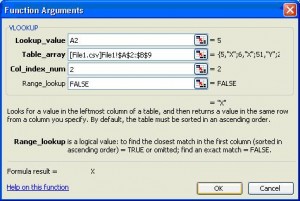 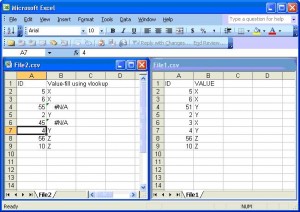 Descriptions in details for this function and each respected field are easily available in excel help.

Further I came up with a batch script to compare field value, simulate vlookup. After doinglittle testing, I managed to fix it.

Please consider this batch script is written specifically for these csv and prove my understanding.
This script will compare file2 with file1, extract similar data from file1 and put it in output.csv.

If you find any difficulty or don’t yield required results by following above process or using script, comment.

In this post we will look into the MySQL memory utilization estimation or calculation based on the global variables. Using a simple stored procedure call you can get the memory usage estimation for the present MySQL instance.

We have global buffers which are allocated irrespective of connections as and when mysql server is started. Along with that mysql server allocates memory to each thread to perform respective tasks.

So the formula goes:

“Show Slave Status” command has a last column “Seconds_Behind_Master”, which gives us idea about how much time slave is lagging behind master. It is an important to be considered parameter in monitoring and maintaining replication.

This article explains us a way to monitor replication slave lag time. It also includes a sample batch scripts to automate the monitoring process, makes it easy to understand.

Now this has been discussed at a lot of places for a lot of times, the solution is to periodically insert a row into a “heartbeat” table on the master server. Let it get replicated on slave and check the “heartbeat”s on the slave. This will surely explain you replication time and the slave behind master.

So whats the idea?

current_timestamp() : The function when used in a query replicates its output same across the slaves. Thus even if the query is executed at a later time on slave, the value stored would be same as what is there in the master.

sysdate() : The behavior of this function is different from the above. It stores the current output of the function at the slave when executed. Thus the output produced could be different from what was produced at the master.

Considering behavior, if we have both values inserted on master server; we will get it replicated on slave. But for sysdate() function, the time will be of slave’s and that will help us calculating the slave lag comparing with current_timestamp() value.

One more case is, when slave is intentionally kept behind master. We can surely add up that time and make according insertion.

Here, HH:MM:SS is slave’s known time of lagging behind master.

We have following queries to monitor slave-lag:

First query will tell us the time difference of slave and master query execution time. Which is actually caused by the functions explained above.

This second query will tell us the time difference of last query execution time from replication to now.

To understand above setup and making it little automated, I wrote couple of batch scripts.

Following batch script will auto insert one row into heartbeat table on per minute basis on Master.

Using sample batch scripts we will be able to understand the replication lag.
ETD, the Execution Time Difference from master to slave shows us how long slave takes to replicate once master has executed the statement. By query we can understand it is difference between current_timestamp() and sysdate().
SBM, Slave Behind Master, points us the time in seconds last query executed on slave from master.
The monitoring script will also tell you the IO and SQL thread status after each minute.

What will you do if one day some one ask you to find single string in all databases, all tables and in all columns, In MySQL Database?

I just read such question and tried to find a “ready made” solution. Reusability is Key Concept 😉 !!

But I ended up finding no “copy-paste” material. Some of the posts like http://vyaskn.tripod.com/search_all_columns_in_all_tables.htm helped me out and supported my thinking of “how to do it” !

Here is the idea for how to search through all databases – tables – columns:

MySQL Procedure for search in all fields of all databases

END_OF_DOCUMENT_TOKEN_TO_BE_REPLACED

This is a LAN Messenger which allows you to chat with friends on local network. The Dos based chat program is just like a chat program but only for LAN. What you need to have is: This tool, a desire for communication and an IP / Machine Name. In one line, its a “batch program for chatting”.

I hope you’ll enjoy it.