Stop there… Above are the topics well discussed and explained at a lot many places and a lot many times, but this is not what we’re here for. I happened to face the question recently “Why’d you need a software tester as a dedicated resource?”

I did not want to get into deep technicalities of the SDL or STL Cycles to prove the roles but in plain simple words I’d try explaining the importance of the role that a tester plays and why a tester is required as a dedicated resource.
END_OF_DOCUMENT_TOKEN_TO_BE_REPLACED

This article will describe you about QTP vs Selenium point by point in a easy to understand way. In the field of Software Quality Assurance (QA) automation tools, Selenium and QuickTest Professional (QTP) are often compared for their features, usability usecases and differences. Whether Selenium or QTP is a better automation tool or tool of your choice!!

Both are distinctively unique and good in their functionality and successful tool individually. To have a quick look, below is a tabular comparison of Selenium and QTP on different parameters.

What is a software quality and what attributes are used to measure it? A very common question you might have faced during Testing or QA Interviews. Many of the Software Testers or Software Quality Analyst don’t know about the attributes at all. This post would help you understand the attributes in simple and sober words.

Software Functional Quality:  characteristics that define how well the software meets functional requirements, and how well it satisfies the end-users.

Software Non-Functional Quality:  characteristics that define how well structural requirements are met that support the delivery of functional requirements. It is usually related to software code and internal structure.

Testability – How easy it is to test the software and to what extent it can be tested.

Usability – It defines how user friendly the software is.

Consistency – How far the software is consistent / uniform in terms of GUI, terminologies, conventions.

Efficiency – It defines the amount of work that the software can do in defined timeframe with minimum resources used.

Accuracy – How accurately the software works with gives the correct results.

Maintainability – How easily the software can be maintained in terms of enhancements/new features/bug fixes.

Reliability – How reliable the software is in performing required functions under different scenarios/conditions.

Portability – How easily the software can be transported and run in different environments e.g. platforms like operating systems (Linux, Mac, Windows), machines it can run on.

Robustness – How robust the software is under unexpected events like software crash, power-off etc and saves its data.

Comment if you have any queries regarding this. Thanks for reading.

In Software Testing, deciding how important the defect is and how soon the defect should be fixed is as important as finding a defect! This depends on how you actually place the defect into Priority-Severity matrix.

I have come across a lot many test engineers, who get confused between priority and severity of a defect. Definition is important but understanding is even more important.

Definitly customer (guidelines) plays a major role in the decision but I’d like to convey in terms of the general scenario. I’d like to add some easy words to clarify the confusion (probably forever).

Defect Priority: Priority is something that is defined by business rules. It defines how important the defect is and how early it should be fixed.

Defect Severity: Severity is defined by the extent of damage done by the defect. It defines how badly the defect affects the functionality of the software product.

Again you’re fed with another definition? No!! Let’s take some examples…

They say a picture is better than a thousand words: 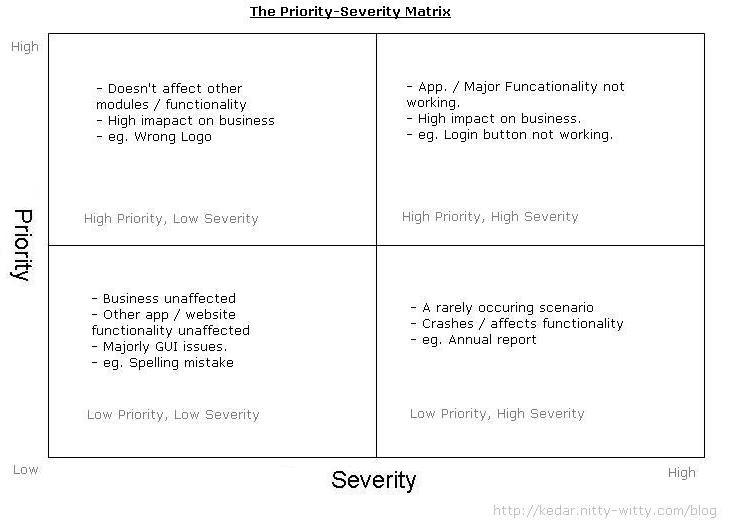 Company logo is half cut on the home page of its website. This is high priority defect because displaying an incomplete company logo would put bad impression on business as this would defame the company or website. So, this defect should be fixed as soon as possible.

As far as severity is concerned, this defect has got low severity because it is not impacting any functionality of the website.

Login button is not clickable on the login page of a web application. This is a high priority defect because this is stopping users from using the site. So, this should be fixed at once.

At the same time, this defect is of high severity because none of the other functionalities can be carried out.

A twisted scenario which rarely occurs but makes the application crash is an example of a low priority defect because user doesn’t come across this scenario normally and can be fixed later.

On the other hand, it is having high severity because it makes the whole application break and no functionalities can be performed.

Spelling mistake in any of the words on some inner pages of the website that is rarely accessed is an example of low priority defect because it doesn’t matter much to the users as business is not impacted and can be fixed later. It is also having low severity because it is not impacting any functionality of the website.

I hope this clears the defect attribution. comments and questions are welcome.

A cause of concurrency problems. Multiple accesses to a shared resource, at least one of which is a write, with no mechanism used by either to moderate simultaneous access.

Continuously raising an input signal until the system breaks down.

Confirms that the program recovers from expected or unexpected events without loss of data or functionality. Events can include shortage of disk space, unexpected loss of communication, or power out conditions.

Retesting a previously tested program following modification to ensure that faults have not been introduced or uncovered as a result of the changes made.

Brief test of major functional elements of a piece of software to determine if its basically operational.

A quick-and-dirty test that the major functions of a piece of software work. Originated in the hardware testing practice of turning on a new piece of hardware for the first time and considering it a success if it does not catch on fire.

Running a system at high load for a prolonged period of time. For example, running several times more transactions in an entire day (or night) than would be expected in a busy day, to identify and performance problems that appear after a large number of transactions have been executed.

A deliverable that describes all data, functional and behavioral requirements, all constraints, and all validation requirements for software/

A set of activities conducted with the intent of finding errors in software.

A tool that carries out static analysis.

Testing that verifies the program under test stores data files in the correct directories and that it reserves sufficient space to prevent unexpected termination resulting from lack of space. This is external storage as opposed to internal storage.

Testing conducted to evaluate a system or component at or beyond the limits of its specified requirements to determine the load under which it fails and how. Often this is performance testing using a very high level of simulated load.

Testing based on an analysis of internal workings and structure of a piece of software.

Testing that attempts to discover defects that are properties of the entire system rather than of its individual components.

The degree to which a system or component facilitates the establishment of test criteria and the performance of tests to determine whether those criteria have been met.

An execution environment configured for testing. May consist of specific hardware, OS, network topology, configuration of the product under test, other application or system software, etc. The Test Plan for a project should enumerate the test beds(s) to be used.

• Test Case is a commonly used term for a specific test. This is usually the smallest unit of testing. A Test Case will consist of information such as requirements testing, test steps, verification steps, prerequisites, outputs, test environment, etc.• A set of inputs, execution preconditions, and expected outcomes developed for a particular objective, such as to exercise a particular program path or to verify compliance with a specific requirement.

Testing methodology associated with Agile Programming in which every chunk of code is covered by unit tests, which must all pass all the time, in an effort to eliminate unit-level and regression bugs during development. Practitioners of TDD write a lot of tests, i.e. an equal number of lines of test code to the size of the production code.

A program or test tool used to execute a tests. Also known as a Test Harness.

The hardware and software environment in which tests will be run, and any other software with which the software under test interacts when under test including stubs and test drivers.

Test-first design is one of the mandatory practices of Extreme Programming (XP).It requires that programmers do not write any production code until they have first written a unit test.

A program or test tool used to execute a test. Also known as a Test Driver.

A document describing the scope, approach, resources, and schedule of intended testing activities. It identifies test items, the features to be tested, the testing tasks, who will do each task, and any risks requiring contingency planning. Ref IEEE Std 829.

A document providing detailed instructions for the execution of one or more test cases.

Definition of a set of test cases or test scripts and the sequence in which they are to be executed.

Commonly used to refer to the instructions for a particular test that will be carried out by an automated test tool.

A document specifying the test approach for a software feature or combination or features and the inputs, predicted results and execution conditions for the associated tests.

A collection of tests used to validate the behavior of a product. The scope of a Test Suite varies from organization to organization. There may be several Test Suites for a particular product for example. In most cases however a Test Suite is a high level concept, grouping together hundreds or thousands of tests related by what they are intended to test.

Computer programs used in the testing of a system, a component of the system, or its documentation.

A company commitment to develop a process that achieves high quality product and customer satisfaction.

A document showing the relationship between Test Requirements and Test Cases.

Testing the ease with which users can learn and use a product.

The specification of tests that are conducted from the end-user perspective. Use cases tend to focus on operating software as an end-user would conduct their day-to-day activities.

A formal product evaluation performed by a customer as a condition of purchase.

The process of evaluating software at the end of the software development process to ensure compliance with software requirements. The techniques for validation is testing, inspection and reviewing.

The process of determining whether of not the products of a given phase of the software development cycle meet the implementation steps and can be traced to the incoming objectives established during the previous phase. The techniques for verification are testing, inspection and reviewing.

Testing which confirms that any values that may become large over time (such as accumulated counts, logs, and data files), can be accommodated by the program and will not cause the program to stop working or degrade its operation in any manner.

A review of requirements, designs or code characterized by the author of the material under review guiding the progression of the review.

Testing based on an analysis of internal workings and structure of a piece of software. Includes techniques such as Branch Testing and Path Testing. Also known as Structural Testing and Glass Box Testing. Contrast with Black Box Testing.

Scripted end-to-end testing which duplicates specific workflows which are expected to be utilized by the end-user.